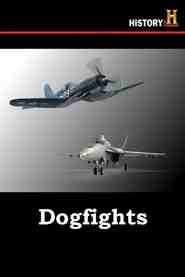 Dogfights is a military aviation themed TV series depicting historical re-enactments of air-to-air combat that took place in World War I, World War II, the Korean War, and the Vietnam War, as well as smaller conflicts such as the Gulf War and the Six-Day War. The program, which airs on the History Channel, consists of former fighter pilots sharing their stories of actual dogfights in which they took part, and uses computer-generated imagery to give the viewer a better perspective of what it is like to partake in aerial combat The series premiered on November 3, 2006.